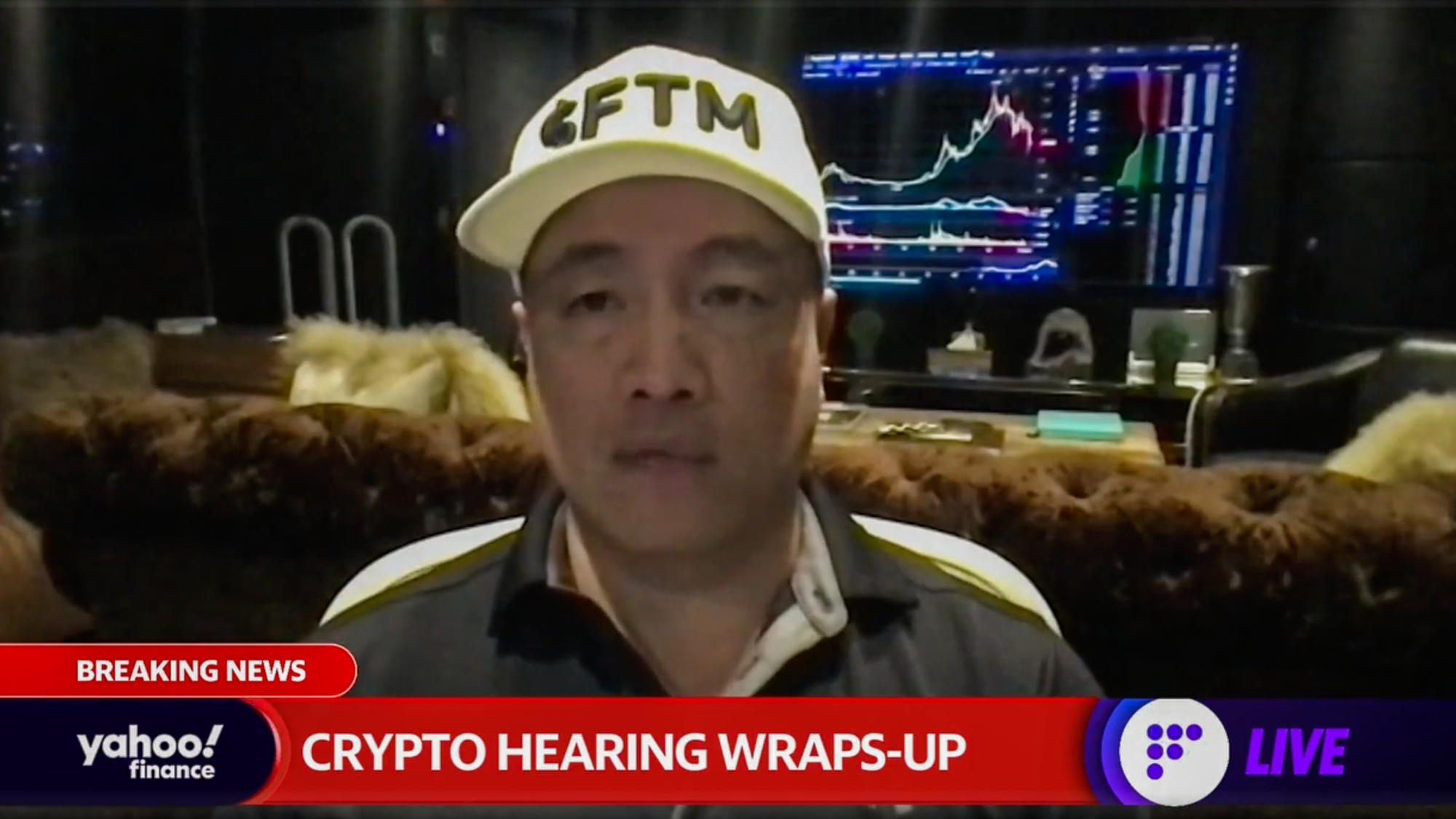 - And we're just wrapping up the first major in-person face off between the House Committee on financial services led by Maxine Waters, and six major crypto chiefs. On a day when crypto is seeing a rise, the gloves came off during an almost five hour testimony meeting. Lawmakers seeking to hold crypto firms more accountable worried about protections for consumers and investors. CEOs arguing too much regulation will stifle growth of potentially transformative digital assets.

Our Yahoo Finance's Jennifer Schonberger watched the hearing in its entirety, and she joins us now. Crypto is volatile today. At points, this meeting got testy. But Jen, of course, the key question-- how much is too much when it comes to regulation?

JENNIFER SCHONBERGER: Yeah. Lots of questions today, Karina. CEOs of the six major cryptocurrency companies-- from cryptocurrency exchanges to stablecoin issuers-- making their Washington debut today, testifying before the House Financial Services Committee. On the hot seat for nearly five hours, CEOs from Circle, FTX, Bitfury, Paxos, Stellar Development and Coinbase all answered questions from lawmakers on understanding the crypto space, to how to protect investors against losses and fraud, to ransomware and helping the unbanked. Far from contentious, actually, ranking member, Patrick McHenry, summed up the approach for many lawmakers during this hearing when he said in his opening statement that members should seek to understand the technology properly to regulate it. So a lot of focus on education during this hearing.

The hearing, of course, coming as regulators and lawmakers looking to come up with new rules to regulate crypto. And just after the Biden administration has put forth recommendations on how to regulate stablecoins, kicking that framework to Congress to come up with. Many of the executives seem to support new regulation, saying that banking on existing bank rules may not be the ticket for how to regulate this asset class.

Diving into some of the highlights here, Coinbase CEO, Alecia Haas, said, existing laws show that Bitcoin should not be classified as a security. She says, it's a new form of digital property or a new way to record ownership. She says, the industry needs clarity, and would benefit around a new definition of what constitutes a digital asset. Charles Coscarelli, the CEO of Paxos, says he thinks we need a new regulatory framework. We shouldn't be banking on the current banking rules. And also stablecoins should be able to access the Federal Reserve. Take a quick listen to what he had to say.

CHARLES COSCARELLI: The solution is not to shoehorn digital assets into a regulatory system designed for earlier generations of financial assets.

JENNIFER SCHONBERGER: Coscarelli went on to say that if policymakers gave non-bank digital asset platforms direct access to the Federal Reserve services, just as the Bank of England already grants access to non-bank payment service providers, it would enable these platforms to offer a wider array of products to consumers without the cost and delay of depending on financial intermediaries. Brian Brooks, the former comptroller of the currency under President Trump, and currently CEO of Bitfury group, a mining firm, questioned the hypocrisy within the proposed regulatory regime. Take a listen to what he had to say.

BRIAN BROOKS: Is it consistent to take the position that only banks should be allowed to issue stablecoins, but then fail to grant bank charters to the largest issues issuers of stablecoins? Does it make sense to bring enforcement actions challenging certain crypto assets as unregistered securities, but then fail to allow those assets to be registered and trade on a National Securities Exchange?

JENNIFER SCHONBERGER: And when asked whether Bitcoin is in a bubble, or what to do about all this volatility, Brooks said, the US debt markets and equity markets, like those, crypto needs price discovery. So we need new rules around price discovery for crypto. He says that right now, 80% of holders of Bitcoin actually hold that Bitcoin. They don't sell it. So most of the volatility, according to him, is generated from one or two traders who are unwinding leveraged trades. So if we have more price discovery, that would cut down on some of the volatility, according to Brooks.

He also said the US should do with crypto what its been doing with stocks, which is to offer crypto in mutual funds. He says, that's a safe, diversified way to offer folks exposure to the space, much like we do with the stock market. Now there was also discussion about maintaining the US dollars reserve currency status around the globe, and how crypto could impact that. Jeremy Allaire, CEO of stablecoin issuer, Circle, says, the question is, will the US support digital dollars as a form of stablecoins to help the US be the competitive currency of the internet? He called it a national economic priority, also a security priority. Allaire says, if this is the new economic infrastructure of the internet, then we want the dollar to play a strategic role there.

So lots of different highlights there during that hearing. I'm sure that lawmakers are going to chew on all of these different takeaways as they look to create a new framework on how to regulate crypto. Back to you.

- All right. All right, Jen Schonberger. Thank you so much. Let's bring in our panel now for their reaction. They've been waiting very patiently. Harry Yeh, Quantum Fintech Group Managing Director, and Christopher Matta, President of 3iQ Digital Assets. Thank you, gentlemen, for your time and for your patience. Only a few minutes to sort of get your reaction, but I do want to ask you both, if you will, to tell me your key takeaways, because there were some key themes that kept coming up. One of them, safety concerns. One of them, the US dollar as a reserve currency, and democratization as well. Your takeaways, so can we start with you, Harry?

HARRY YEH: Hi, Karina. Thanks for having me on the show. So yeah, the topics that they discussed at this hearing are things that have actually been talked about a lot before. What's great, at least today, is they're starting to bring a lot more of the topics into view, particularly those of stablecoins, and also energy efficiency, such as Bitcoin mining. So some of the projects that we work on, such as Fantom, for example, uses delegated proof of stake, and doesn't use as much electricity, is eco-friendly.

So there's definitely a lot of innovation going on in this space right now. Just seeing all the topics that are actually brought up at the hearing, what's good to see is that there's a good meeting of the minds between regulators, senators, as well as the people running a lot of these organizations. So a lot of the people that were at the panel, at the hearing today, are friends of ours that we've worked with from crypto since probably beginning in like, 2013.

- Christopher, I'd love to get your take on what you saw so far today, and the challenge that the industry has when they're looking to be regulated by a group of people who may not have a real grasp of how this industry works.

CHRISTOPHER MATTA: Well, firstly, thanks again for having me on. I think it was really great to see how well-spoken folks during the hearing today were, especially considering in the past some of the conversations that have gone on. It felt like there wasn't necessarily as good of an understanding of the technology. I think now we're starting to see a really thoughtful, honest conversation between the industry and the regulators, especially which is important considering that they're now being tasked to put forth different frameworks around things like stablecoins, which we were just talking about.

And it was talked a lot around putting audit requirements, and not limiting the number of institutions that can actually issue these stablecoins. I think that's really important as the space continues to develop that the regulators are looking to work with the space and really not stifle innovation, which was something that was consistently echoed today. And I think you even saw that highlighted around the patchwork nature of the regulatory infrastructure that's in place today for the space. A lot of different regulators were mentioned-- the CFDC, the SEC-- and many of the panelists were mentioning that there needs to be harmony.

And I think many in Congress were echoing that sentiment, that we need to have a primary regulator that harmonizes what the rules are, the rules of the road for the space. Which, I think, ultimately, for the long term, is really going to help the space when it comes to things like approving ETFs, or regulating spot crypto markets, or providing oversight for market manipulation. These are all things that are key gaps that the space wants to get clarified, and the regulators want to get clarified. So working together to do that is great progress.

- And Harry, I want to ask you, one of the other key concerns is obviously volatility. And one of the questions posed by Representative Greene was, when do we become concerned about a bubble?

HARRY YEH: That's a great question. So I've been involved in cryptocurrency since 2013, so I would say that this is probably my third bull market cycle. So I think in any nascent industry, even if you look at stocks back in the '80s, there's typically a lot of volatility. So before Bitcoin-- when we started trading Bitcoin, there was no futures and no spot and no options market. What you're starting to see now is, there's a lot more of these derivative products and futures market that are available for hedging.

However, a lot of the hedging that's used right now is still mostly for speculative purposes. So I think once the market matures to more traditional futures, kind of like the CME derivatives, versus some of these projects where they have 10x or 20x leveraged products, you'll start to see a lot less volatility. I think, even if you look at the historical volatility now with Bitcoin versus how it was back in 2013, it's a lot less volatile of an asset than it used to be.